At the Haiti Adventist Hospital, the months of July and August 2016 were dedicated to training/updating both our clinical and non-clinical staff in BLS and CPR respectively. Several sessions were scheduled to ensure that as many people as possible could benefit from training without disrupting their work. While this training was mandatory for our clinical staff, it was also offered to the non-clinical staff so that whoever was interested could take it. Several persons including security guards, maintenance staff, orderlies, business office staff and even our administrator opted to take the class.

Training was conducted by Mr. Sean Smith of Critical-Care Professionals International, and Mrs. Trisha Groschel, who worked along with our translator, Mr. Jonathan Auguste. They were assisted in some of the sessions by Drs. Varnelle Jasmin and Henri-Claude Telfort, both doctors who work in the emergency department. We are grateful for our trainers who patiently explained and demonstrated the different techniques and answered a myriad of interesting questions. Certainly, participants had fun while learning which made for quite enjoyable sessions. In summary, 76 members of staff were trained in BLS/CPR this July and August. However, training was also conducted on previous occasions, bringing the total amount of staff trained during this year to 103. Already, the Education Department has received reports from physicians about emergency situations where staff was called into action to resuscitate a patient and they performed exceptionally well. In upcoming months, more advanced training in critical care will be conducted for our physicians and nurses as we get ready to inaugurate our newly renovated Emergency Department. We are excited about our development and increased capacity to serve people in Haiti. 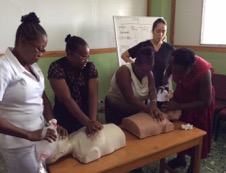 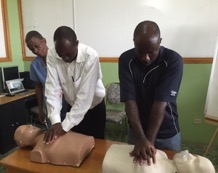 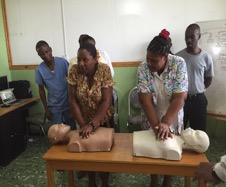