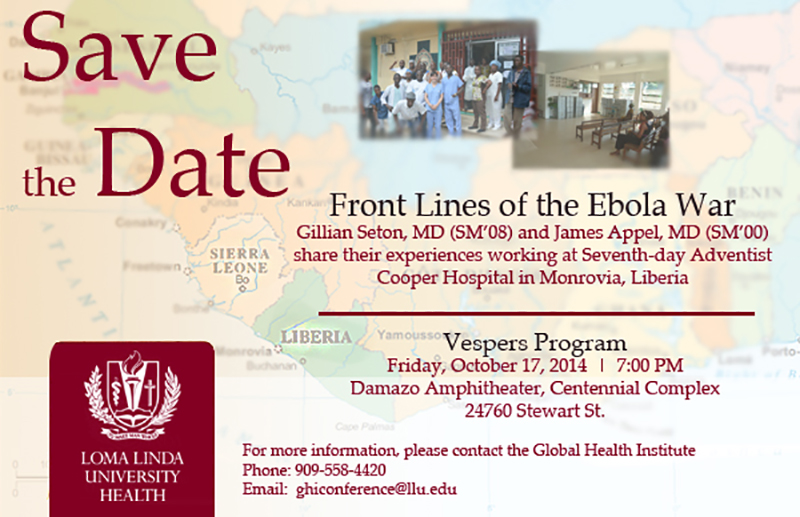 All are invited to join in a special vespers program on Oct. 17 at 7 p.m. in Damazo Amphitheater, Centennial Complex. Focused on Ebola, this vespers will feature two Deferred Mission Appointees (DMA’s) that have just returned from West Africa.

Loma Linda University School of Medicine (LLUSM) alumni, Gillian Seton and James Appel, have both dedicated their lives to serving others. Working as DMA’s through Adventist Health International, they have been on site in Monrovia, Liberia.

Right in the heart of the Ebola outbreak, these two physicians have worked tirelessly at the Seventh-day Adventist Cooper Hospital, which until a few weeks ago was the only hospital still operational in Monrovia and serving as an Ebola-free zone. Here they continued to treat non-Ebola related illnesses, such as Malaria, until the hospital was forced to close down due to several staff members suspected of contracting the disease. Cooper plans to reopen after a three-week quarantine as a maternity ward to service the local needs.

Seton has been serving at Cooper Hospital as a general surgeon since February 2014 and is currently in the States on leave. While home she will be traveling to Loma Linda University where she is joining other hospital administration from around the world for the Global Healthcare Conference. Also attending this event is James Appel. Having worked for AHI for nearly a decade, Appel was serving at Abougoudam Adventist Hospital in Chad when he was asked to transfer to Monrovia and help during this crisis. He agreed without hesitation and went on to work at Cooper for nearly two months prior to closing.

Both of these medical professionals have given their time, commitments and lives to helping those in need. Even though they faced the threat of contracting the disease on a daily basis, their determination and caring attitudes overcame all odds and helped them to be a source of help during a time when help was scarce.